Symptoms of the cause and diagnosis of lung cancer - GO NUISONK

Symptoms of the cause and diagnosis of lung cancer

The majority of lung cancer is caused by smoking for a long time, but in some cases it can also occur in people who don't smoke (but are exposed to cigarette smoke). Research shows that the development of lung cancer can also be influenced by genetic factors and exposure to various chemicals and air pollution.

Lung cancer is the leading cause of death in men and women in the world, and is perhaps one of the most fatal cancers. In the United States, 16.8% of lung cancer patients can survive about five years after being diagnosed. However, in developing countries, the results are significantly lower. Official data confirm that lung cancer kills about one and a half million people each year, as of 2012.

Lung carcinoma can be categorized in several "stages" which refer to the extent of cancerous tissue spread. Treatment for lung cancer, including surgery, drugs (chemotherapy), and radiation therapy. 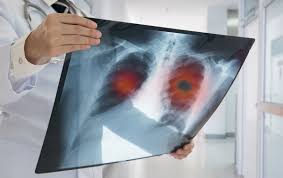 The development and occurrence of lung cancer are caused by different factors, and smoking is identified as the main cause. Research shows that cigarette smoke has more than seventy carcinogens or substances that cause cancer. In developed countries, the majority of deaths from lung cancer (around ninety percent in men and seventy percent in women) are caused by smoking. In addition to smoking, passive smoking, or secondhand smoke, also produces lung cancer. In several studies, it was found that passive smoking is more dangerous than active smokers.

Radon gas is another substance that can cause lung cancer. This odorless and colorless gas is the result of radium damage. This will ionize genetic material that can cause mutations that cause the development of cancer cells. In the United States, radon gas is the second highest cause of lung cancer, after cigarette smoke. Asbestos, a substance used in many insulation and construction materials in the past, is also a common cause of lung cancer.

Research shows that exposure to air pollution can increase a person's risk of developing lung cancer. Air pollution can be in the form of nitrogen dioxide, exhaust fumes, and smoke from burning charcoal, wood, crop residues, or animals.

Finally, genetics can also play an important role in the development of lung cancer. Research shows that people who have relatives with this disease are twice as likely to develop lung cancer.

Symptoms of lung cancer can include:

Treatment and management methods for lung cancer depend on the severity of the condition and the health of the patient. Common lung cancer treatments include chemotherapy, surgery, radiation therapy, and palliative care.

Surgery involves removal of the pulmonary lobe, usually prescribed for patients suffering from the early stages of NSCLC. The surgical procedure is known as lobectomy and can be done as a full lobectomy or wedge resection.
Chemotherapy will depend on the type of tumor found. SCLC is usually treated with a combination of radiation therapy and chemotherapy, whereas NSCLC sufferers are given chemotherapy alone as a first-line form of treatment.
Radiotherapy is often prescribed with chemotherapy, usually for patients who are not healthy enough for surgical treatment.
Palliative care is usually an additional or complementary treatment for patients undergoing chemotherapy.