What is blood cancer?

Hematological cancer, also known as blood cancer that affects the production and function of blood cells. Most cancers begin in the bone marrow where blood is released. Cancer cells prevent normal blood cells from carrying out their functions.

Leukemia is a cancer of white blood cells, which stops white blood cells from fighting infection. This is the most common type of blood cancer. When a person has leukemia, his bone marrow is unable to produce enough red blood cells and platelets to supply the body's needs.

Based on how fast its development and type of white blood cells are attacked, leukemia is divided into several types, namely acute and chronic. Chronic leukemia is far more dangerous and difficult to treat.

Lymphoma blood cancer develops on lymphocytes - a type of white blood cell that acts to fight infection. This type of cancer also affects the lymph nodes, spleen, thymus, bone marrow and other parts of the body. Abnormal lymphocytes can interfere with your immune system. This will reduce the sufferer's immune system against harmful factors from the outside.

Myeloma is a type of cancer formed by malignant plasma cells. Plasma cells produce antibodies (or immunoglobulins) that help the body attack and kill germs. Normal plasma cells are found in the bone marrow and are an important part of the immune system.

Bone marrow is soft tissue in several bone cavities. Apart from plasma cells, bone marrow also has cells that make up other types of blood cells.

Cancer begins when cells in the body begin to grow out of control. Cells in almost all other parts of the body can become cancerous, and can spread to other areas of the body. This type of blood cancer prevents the production of normal antibodies, which results in your immune system becoming weak and vulnerable to infection. 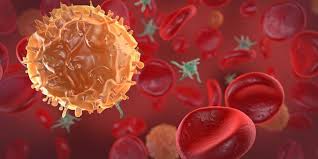 What are the symptoms of blood cancer?

Leukemia symptoms are basically difficult to recognize because they do not have specific characteristics. Even so, leukemia has many symptoms that can help detect this disease, such as:

Common signs and symptoms of lymphoma blood cancer are:

Because myeloma affects the immune system, this disease can cause many symptoms in the body. However, there are some typical symptoms of myeloma blood cancer, including:
Anemia
Frequent bleeding and bruising
Bone and calcium disorders that cause bones to break easily
Susceptible to infection
Kidney disorder or damage
Swollen foot

In general, scientists still do not know exactly what causes blood cancer. However, experts suspect that changes in DNA can make healthy blood cells become cancerous.

This cancer also has a genetic predisposition. So, if your closest family such as parents, siblings, grandparents, or grandmothers have a history of this disease, then you also have the risk of having it.

In addition, there are also other factors that can be the cause of blood cancer. Among them are exposure to hazardous chemicals, radiation exposure, and certain viral infections.

How to treat blood cancer?

Chemotherapy is the use of anticancer drugs designed to disrupt and stop the growth of cancer cells in the body. Chemotherapy for blood cancer sometimes consists of administering several drugs together in a different set of medications. In addition, chemotherapy can also be given before stem cell transplantation.

This procedure can be used to destroy cancer cells or to reduce pain or discomfort when blood cancer symptoms appear. This procedure is done using high-energy waves such as x-rays, gamma, protons, and electrons to kill cancer cells. Although radiation therapy is most often used as a cancer drug, but sometimes this therapy is also used to treat patients who are not affected by this disease, such as tumors and disorders of the thyroid gland.

Target therapy is therapy that uses drugs or other chemicals to identify and attack cancer cells specifically without killing normal cells.

A stem cell transplant will implant healthy blood-forming stem cells into the body. Stem cells can be collected from bone marrow, peripheral blood, and cord blood.

In general, the treatment used for blood cancer can be a combination of several therapies. Consult your doctor for treatment options and cancer drugs that are right for you. Each treatment for this disease has different side effects. Consider the risk of consuming cancer drugs with your condition.